HEY is a new email service with webmail and a mobile client, recently launched by the folks behind Basecamp, a web-based project management tool. HEY users receive email at the domain hey.com.

They're selling email service for $99/year (or more). If you're really just interested in a taste of deliverability and rendering testing, you can get a free trial account that lasts for two weeks (and HEY gets to pick your username). You can initiate that free trial from inside the mobile app or on the web. (I tested the iOS app; YMMV on Android.)

I suspect that $99/year is a high barrier to entry. This thing isn't going to grow very quickly -- especially if by quickly one means "as quickly as Gmail grew from zero to 1.5 billion users." Even if HEY attracts a fair number of users, they've got a long slog to reach some sort of critical mass on a scale with any other B2C email provider -- much less the big ones. Right now, they are perhaps not much of a force to be reckoned with. Check back with me on that in a couple of years.

And -- will they make money on this? I don't know and it possibly doesn't matter. I don't see them making enough from $99/year email service subscriptions to be profitable as a standalone entity, but it might be something that Basecamp is happy to subsidize forever, to promote their specific privacy-centric view of how they think email should work. And while HEY says that 100,000 people have requested invites, they aren't saying that this has translated to 9.9 million dollars in initial revenue. (Not to mention, we don't know initial startup costs or ongoing cost of maintenance or management.)

What does signing up with and starting to use HEY email feel like? I had to sit down and think a bit, how best to answer this question. I gave it a test drive, and poked at different bits, and here's what I came up with: It feels like I just got handed a box of pipes, a welding kit, and an instruction manual, instead of a shiny, polished final product.

I am sure the HEY email client and its ruleset and features are very powerful. You know how I'm sure? Because something in their UI or my "imbox" tells me so constantly. When you first log in, there are seven (SEVEN!) emails guides waiting for you, explaining to you how things work, and at various points you get this "Continue learning HEY" pop-up that offers to teach you how to filter email messages "over the course of your next 15 emails." Meaning that for the first 15 email messages you receive, HEY will ask you if you consider the email message to be a personal one-to-one email, a newsletter or marketing message, or a transactional or confirmation message. This whole thing -- I found it overwhelming. Too much guidance, too much of a process, not as simple or free flowing as I would have liked.

In my opinion, an email client/service shouldn't need an instruction guide to get started. 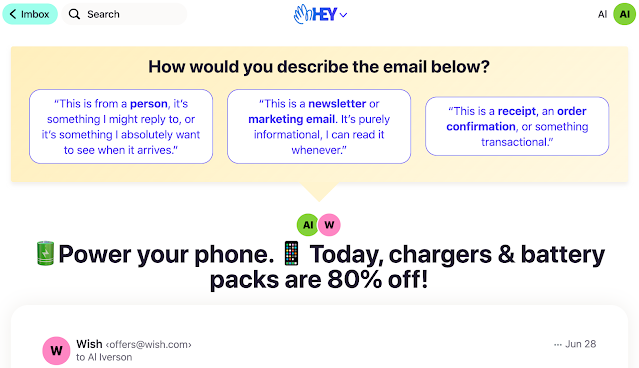 Compare this to Gmail. Gmail is very powerful, but they don't tell you about every possible option right out of the box. They land you rather gently, in my opinion, and after you're comfortable, maybe you poke around and find Gmail's powerful filtering options. The downside is that maybe you never discover Gmail's power (because, honestly, I think it can pretty much do everything that HEY can do -- my personal Gmail account is well filtered and organized), but the upside is that Gmail doesn't have a big banner that says "GMAIL IS SO POWERFUL YOU COULD PLOTZ!!!" And it doesn't drive you through a training process anywhere near as long as the one offered by HEY. There is definitely a difference in mindset between letting the product or service speak for itself, compared to having constant in-UI notices telling you how powerful and complicated it is.

You'll notice that I didn't really touch on filtering and message handling mechanisms here. Too many options, not enough time. And I'm sure there will be plenty of other reviews out there that will talk to those points. Instead, I wanted to focus more on a quick overview from an email sender's perspective.

HEY does indeed seem to be blocking my open tracking pixel (aka "spy tracker"), as tested with my WombatMail song-a-day emails. I'm not going to engage in an arms race to try to overcome that, but I suspect others will. I am sure somebody has already thought of making every image a dynamic per-recipient tracking mechanism. (And don't forget that click tracking can also provide per-user interactivity tracking.) I don't think open pixels are as evil as certain people do, but I also don't think an ISP blocking them is the end of the world. It's just something you'll learn to deal with, assuming it persists. (Do note that except for the open tracking pixel, all other images seemed to load just fine.)

When a hey.com user receives an initial email message from a new sender, that email gets held in "the Screener" - a sort of limbo zone. The subscriber gets a list of new senders and HEY will ask the subscriber whether or not each sender should be allowed through the door and into the "imbox." That's kind of neat, actually. Reminds me a bit of a double opt-in. If you're sending wanted mail, no big deal, right? But I worry that spammers could perhaps exploit this. Just spam random Hey.com addresses and see who lets you through. It's sort of like spamming with collect calls, maybe? I don't know. Do others see the potential for abuse there?

The screening process can be confusing. I signed up for various email lists to test things out. Wish.com, for example, emailed me a welcome message, sending as welcome@wish.com. That got held and I had to allow it through. OK. But then later, Wish emailed me an initial marketing email, from offers@wish.com. So THAT got held up, and not let through, even though by that point I had pretty much opted-in to receive emails from Wish about three different ways. OK, it's not exactly a bug. I know how per-sender-address whitelisting works. But senders sometimes vary their from address, and that'll trip things up unexpectedly. Wish was not the only sender where this was an issue. I observed this with CBS News and I am sure others will have this same problem. Even if you're doing everything great as a sender -- double opt-in / confirmed opt-in, etc., you could still get penalized if you have more than one active from address, even if your IP reputation or domain reputation is great. 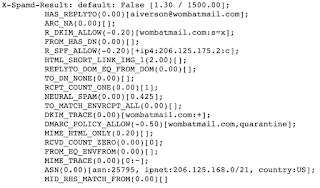 Viewing full headers and raw source of an email message is easy enough. Just click on the three dots menu in mobile or webmail and select "View Original." On Webmail, a new window opens with the headers and message source. On mobile, you get a screen allowing you to download or copy the headers and raw source as a text file. You can even copy it to the clipboard and paste it into some other application. Reviewing full headers shows me that they do appear to be checking for email authentication results, properly reporting on the SPF, DKIM and DMARC settings for the messages I've sent. There's also an "X-Spamd-Results" header which suggests that they may be running a custom version of SpamAssassin as part of their spam filtering engine. (I also see rspamd in the headers, which could be this.) Either way, use of an open source spam filtering mechanism probably doesn't mean that they've limited themselves to an off-the-shelf spam filter ruleset. They wouldn't be the first company to take a platform like SpamAssassin and heavily customize it to fit their specific needs.

There is a "report spam" mechanism, but I haven't tested it just yet, as I didn't want to damage my own sending reputation and I didn't want to punish Wish.com just for the sake of testing. I have no idea where spam reports go, what they do with them, do they block bad senders and if so, how. I can't find any mention of an ISP feedback loop, so I think it is safe to assume that there isn't one.

For those wondering about address recycling, HEY says that they won't ever recycle a paying user's email address. Good to prevent misdirected password requests, but bad for HEY if this thing takes off like a rocket and then 10 years from now no common usernames are available for new users, even if a bunch of them are no longer active. And note that today, HEY does not have support for custom domains. Until that changes, hey.com is the one and only subscriber email domain for this email platform.

So, there you go. These are my first impressions of HEY. Your take might be different than mine. You might love it and have already paid your $99 for the first year of service. There's nothing wrong with that! I hope it works well for you. But I'm thinking of it more from the perspective of will this thing change the world-- or, will it make senders change how they do things, and I think my answer to either question is somewhere between "no" and "maybe, but it's going to take a very long time."

What's your take? Feel free to share your thoughts in blog comments! And thanks for reading.
Posted by Al Iverson on Monday, June 29, 2020
Topics: email client, hey.com

Comments policy: Al is always right. Kidding, mostly. Be polite, and you're welcome to join in, even if it's a differing viewpoint.

Looking for an email job? Check out EmailGeeks.com.